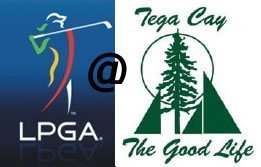 The City of Tega Cay and the Tega Cay Golf Club had a huge announcement this week. The Tega Cay Golf Club and Course has been added as a location for future LPGA events. A scheduled event has not yet been officially announced but the city speculates the first Ladies Professional Golf Association event may come as soon as Fall 2010.

UPDATE FEB 2010 with not so good news – See the following post http://seetegacay.com/tega-cay/mayor-sheppards-letter-on-the-lpga/

This is a very positive announcement for Tega Cay and Fort Mill SC.? Besides economically benefiting our area during the event, all of the Tega Cay home owners on the golf course will have a great seat to watch the LPGA event 🙂 . Here is the press release from the City of Tega Cay:

The City Council of the City of Tega Cay is pleased to announce that it is in negotiation with Special Events Unlimited (SEU) to bring an officially sanctioned Ladies Professional Golf Association (LPGA) event to Tega Cay. Following numerous visits to Tega Cay by LPGA officials, the LPGA has selected the Tega Cay Golf Club as an official tour event site for the 2010, 2011, 2012, 2013 and 2014 seasons. While specific dates and title sponsors are yet to be announced, initial plans call for a full field of professional golfers to compete for a total purse of over 1.1 million dollars in the Fall of 2010.

“This is a great opportunity for the City of Tega Cay, York County and the State of South Carolina” says Tega Cay City Manager Grant Duffield. “The initial projections show a several million dollar impact to our local economy”. Duffield says that the biggest beneficiaries of this event will be volunteer organizations in the area. “Our local charities will receive a portion of $200,000 for their charity”.

SEU President Tommy Stines states that the LPGA is extremely excited about the Tega Cay venue, describing the course and conference facilities as ideal for the event. Stines says that “The Golf Channel will be televising the 4 day event. In addition there will be a Celebrity/am Tournament hosted by Tarheel basketball great James Worthy, as well as a traditional pre-tournament pro/am”. With a field of 144 well recognized

professional golfers, Stines says he envisions the tournament will quickly become a mainstay on the LPGA schedule. “We anticipate this Tournament getting bigger and better every year”.