You are here: Home / Archives for Tega Cay Parks & Rec 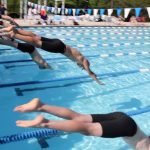 This week's Talk of the Town video features the Tega Cay Breakers. The TC Breakers are a competitive summer swim team consisting of 200 swimmers ages 4-18. The season begins in late April and ends in June. ?The Breakers compete with other local teams as part of the Metrolina Swim League and ?have earned the Championship title for the past seven (7) years. Many of the swimmers and coaches END_OF_DOCUMENT_TOKEN_TO_BE_REPLACED