You are here: Home / Local Lake Wylie Info / Charlotte MSA Exiting Homes Sales Are Only Down 4.4% for October 2008

Is there good news with an existing home sales report headline like this?

Standard & Poor’s published a press release today called the S&P/Case-Shiller Home Price Indices for homes sales data through October 2008. The report shows continued declines in the prices of existing single family homes across the United States. 14 of the 20 metro areas showed record rates of annual decline and 14 metro areas are reporting declines in excess of 10% versus October 2007.

“Three of the metro areas have given back, on average, more than 30% of the value of homes since October of last year. Phoenix remains the weakest market, reporting an annual decline of 32.7%, followed by Las Vegas, down 31.7%, and San Francisco down 31.0%. Miami, Los Angeles, and San Diego were close behind with annual declines of 29.0%, 27.9% and 26.7%, respectively.

Monthly data also do not show much improvement in the national housing market. All 20 metro areas, and the two composites, posted their second consecutive monthly decline. In addition, six of the MSAs had their largest monthly decline on record – Atlanta, Charlotte, Detroit, Minneapolis, Tampa and Washington. Most of the positive monthly data recorded in the spring and summer months, merely reflects seasonal patterns in home prices, as opposed to a turnaround in the downward spiral in national home prices.”

But here might be some good news for our local housing market in the Charlotte MSA.

“Dallas and Charlotte faired the best in October in terms of relative year-over-year returns. Still in negative territory, their declines remained in low single digits of -3.0% and -4.4%, respectively. It should be noted, however, that both of these values are worse than those reported in the September data. In addition, Charlotte also reported its second consecutive largest monthly decline on record, down 1.8%. Cleveland and Denver were the only markets that showed any improvement in its year-over-year returns compared to last month’s report.”

Ok so the last part of the message about Charlotte is negative but the good news is our area which includes Fort Mill, Tega Cay, and the Lake Wyllie area, is still better than the top 18 metro areas.

Here is the table from Standard and Poor’s Dec 30th 2008 press release: 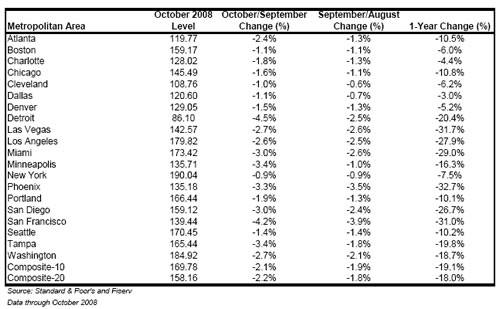 I bet you most articles written about the Standard and Poor’s press release will highlight the negative message. Is your glass half full or half empty??

Let me know what you see and read.