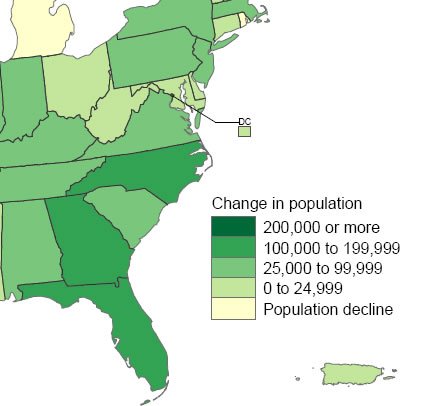 The US Census Bureau released a report today on the “Fastest-Growing Metro Areas” between 2007 and 2008 based on July 1 2008 population estimates. The Charlotte metro are which includes Fort Mill, Tega Cay, Lake Wylie, Rock Hill, all of York County SC saw its population climb 3.4 percent last year. Fort Mill SC which is in York County SC is approximately 7 miles south of Charlotte

The Charlotte Metro area had the second highest number of population growth in the top 10 fastest-growing areas with a estimated July 1, 2008 population number increase of 55,368 and is the largest city in the top ten at 1,701,799.

Here is a snap shot of The US Census Bureau’s top ten “Fastest-Growing Metro Area” list:

South Carolina cities other than York County cities in SC on the top 100 fastest growing metro areas list are:

If you would like to learn more about the Fort Mill/York County area please visit one of my many informative websites or contact me.